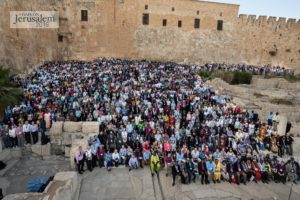 The above photograph was taken on the Temple Steps in Jerusalem, as the delegates at Gafcon III gathered together for a celebratory service and to have a photo taken ’10 Years On!’.  You can read more about the significance of this global photo shoot here.

It was a joy to be in Jerusalem, and hopefully this blog post will allow you to taste something of the flavour of Gafcon III and to place the conference statement, written in the form of “A Letter to the Churches”, in context.  (Also, I have taken most of this post from a friends reflection and she has let me ‘borrow’ what she said!)

“We will proclaim Christ faithfully to the nations!”

This was the rallying cry repeated over and over again by the 1,950, or so, delegates at Gafcon 2018 and there is no doubt in my mind that it was more than a slogan.  This was a declaration of intent.  Gafcon is not a conference where people come to moan about the state of the church – instead it was a conference where those facing persecution and under pressure to conform, were reminded of the glorious truth of the gospel and inspired to return to their corner of the globe ready to share the greatest news of all with those they live among.  It has certainly been a personal challenge to me as I have met with friends and neighbours – will I proclaim the gospel to them?

Additionally, it caused me to think about us at the Windsor Fellowship Church, are we in maintenance mode or missional mode.  A church in maintenance mode is easy, predictable, everything is the same.  In contrast being in missional mode is hard, sacrificial, tiring.  Are we willing to proclaim Christ faithfully to Windsor?  If we are it’ll be hard, but it’ll also be glorious.

Global Anglican Futures Conference: Gafcon lives up to its billing.

Gafcon is Global: There were delegates from over 50 countries; from France to Fiji, Mexico to Myanmar.  Some national delegations were made up of hundreds of bishops, clergy and laity, (click here to see the Ugandans in fine song on the plane to Jerusalem) other countries were represented by lone voices, but to hear the Lord’s Prayer spoken in over 100 languages simultaneously was to experience something of what it means for God to be calling people from every nation, tribe, people and language to praise his holy name.

Gafcon is also developing truly global teams, networks and leadership, which overturn the sometimes neo-colonial expectations of the traditional Anglican structures.  It was a joy to have preachers, presenters and seminar leaders from six continents sharing their wisdom with us.

Gafcon is Anglican: In England we often downplay our Anglican connections – but at Gafcon the benefits of belonging to a biblically based, historically grounded, episcopally led global family, with a shared liturgy that allows us to worship together, is something to be celebrated.  The message was clearly stated in the “Letter to the Churches”, published on the final day: “We are not leaving the Anglican Communion; we are the majority of the Anglican Communion seeking to remain faithful to our Anglican heritage.”

This is an Anglicanism which is based on a joint confession of biblical faith and a desire to support one another as we proclaim the true gospel to the nations.  It stands in contrast to those seeking institutional unity based on archaic structures.

Gafcon is looking to the Future: Many commentators have remarked on the ‘maturity’ of Gafcon III and there is no doubt that this conference has moved forward in tone, content, organisation and ambition.

In 2004, the Windsor Report warned that the proposed actions of The Episcopal Church would ‘tear the fabric of our Communion at the deepest level”.  In the intervening years, faithful Anglicans have prayed, protested and pleaded in their attempts to persuade the traditional Instruments of Communion (The Archbishop of Canterbury, the Primates’ Meeting, the Lambeth Conference and the Anglican Consultative Council) to uphold discipline and restore order.  Their efforts have been ignored and, emboldened by the lack of discipline, other provinces have followed the revisionist path, which in turn has increased the size and depth of the problem.

The “Letter to the Churches” states:

“During the past twenty years, the Instruments of Communion have not only failed to uphold godly discipline but their representatives have refused to recognise our concerns and have chosen instead to demean Gafcon as a one-issue pressure group and accuse it of promoting schism, where in fact the schismatics are those who have departed from the teaching of the Bible and the historic doctrine of the Church. Slogans such as “walking together” and “good disagreement” are dangerously deceptive in seeking to persuade people to accommodate false teaching in the Communion.”

The letter expresses grief and repentance, but this is no outward display of hand-wringing, instead those present accepted that it was Gafcon’s responsibility to ensure the future health of the Anglican Communion:

Gafcon is truly a Conference: One of the most extraordinary things about Gafcon is that it is a proper conference – the delegates are able to confer with one another – and their voices are listened to.  Those with responsibility for writing the conference ‘statement’ worked long into the night on Thursday, as they sought to consider every delegations’ response to the ‘Draft Statement’.  What emerged was the “Letter to the Churches” – a letter that I hope will encourage and challenge us all and one that we will wish to share widely for discussion and prayer.

Finally, one of the remarkable (and perhaps unique, in Anglican circles) elements of Gafcon III was the global participation enabled through social media and the live stream video output.  165,000 unique individuals tuned into the Livestream (and this doesn’t count the 5 million Nigerians who watched it on their local Anglican TV network), and more than 3/4 million individuals engaged with the official Gafcon Twitter, Facebook and Instagram feeds (#gafcon2018).  These are extraordinary numbers, even more so when one realises they do not take into account those who viewed content after someone else shared it, or after the conference closed or heard about Gafcon through the thousands of unofficial tweets and posts by delegates!

If all this makes you feel as if you might have missed out – do not fear – the official video, photos, news and blog is all there waiting to be watched, viewed, read and shared.

So, if you are still reading after all that, what can we pray?

There is of course, much to give thanks for – God poured out his blessing on the conference in so many ways – allowing us to bear witness to the truth of Psalm 33:
Behold, how good and pleasant it is
when brothers dwell in unity!
It is like the precious oil on the head,
running down on the beard,
on the beard of Aaron,
running down on the collar of his robes!
It is like the dew of Hermon,
which falls on the mountains of Zion!
For there the Lord has commanded the blessing,
life forevermore.

I have also been reminded of Nehemiah chapter 6.  Gafcon is, I believe, a ‘great project’ and one that the enemy would love to destroy through distraction (6:1-4), fake news (6:5-8) and intimidation (6:10-13) – our prayer for those who are leading this movement, both globally and locally, must be the same as Nehemiah’s:
They were all trying to frighten us, thinking,
“Their hands will get too weak for the work,
and it will not be completed.”
But I prayed, “Now strengthen my hands.”
Nehemiah 6:9

Our Safeguarding Officer is Kerry Baker and she can be contacted via the church or by e-mail at safeguarding@windsorfellowship.com